The History of the Club 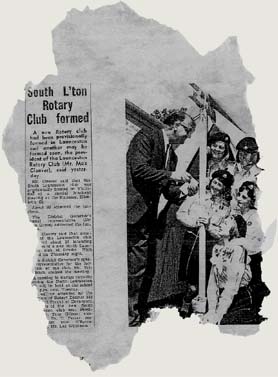 On the evening of 18 January 1962, a formation meeting for the Rotary Club of South Launceston was held at St Aidans hall. This was followed a week later by a luncheon meeting at ‘The Embassy’. Sponsored by the Rotary Club of Launceston (one of the oldest Rotary Clubs in Tasmania- founded 1924), District Governor Albert Freak appointed John Grove as his Special Representative, and Charter was granted on 2 March, 1962.

On 14 March, 1962, the Club was inducted into Rotary International by Max Cleaver, President of the Launceston Club at the War Memorial Hall, High Street, Launceston (Windmill Hill). We became the 13th club formed in the State. President Max recited the induction charge to Charter President Tony Gibson who, in turn, inducted the Club’s charter members. As the following extract from Launceston’s Bulletin (14/2/62) notes, South Launceston was not the only club to be established that evening:

“This is the night our members have been anticipating and waiting for these past several months, and Rotarians of North and South, we bid you welcome to our Club and trust that this night will be one of your most cherished Rotary memories. It certainly will be for the members of the Launceston Club, for it will doubtless be a historical value in that it could be the first time on record that two Rotary Clubs were inducted at any one Rotary meeting.” The following Saturday, 17 March 1962 the formal presentation of Charters by District Governor Albert Freak was made at the Golden Central Hotel in Charles street before a capacity meeting of 380 Rotarians and guests from all parts of the State and two visitors from New Zealand.

Gifts were presented and South Launceston received a “Rotary Gong” and Striker from the Rotary Club of Launceston and from Rotarian Jock Hopwood, the Sergeant-at-Arms, regalia packed in a leather case, all personally by by jock.

The success of any organisation, be it commercial, religious, public, private, benevolent, or even malevolent, rests entirely on the people who constitute its membership. So it is with the Rotary Club of South Launceston Inc. Hundreds of men and women have, over the 53 years, give their time, expertise and assistance to the Club, to their fellow humans, and to the advancement of Rotary.

At this time (19/7/2019) we have 45 members and 7 Honorary members who are still as passionate about Rotary as the Rotarians have been over all those years.

**Extracts from “An History of the Rotary Club of South Launceston Inc.” Booklet