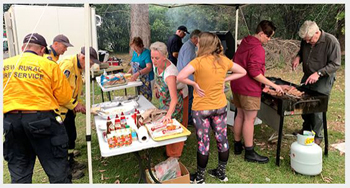 By Ross Wade, Past President, and Issa Shalhoub, member of the Rotary Club of Milton-Ulladulla, New South Wales, Australia

From August through October of last year, residents of the coastal community of Ulladulla, New South Wales, Australia, watched somewhat passively as reports came in about the serious brush fires in other parts of the state and in Queensland.  But they were shaken out of their complacency the last week of November when a serious bushfire began spreading rapidly much closer to home.

For a week, local firefighters worked around the clock to battle the blaze near Batemans Bay, about 66 kilometers (41 miles) south of Ulladulla, while support staff provided food and basic provisions to the firefighters. By the afternoon of Friday, 29 November, authorities realized that more support was required. An urgent call was sent out to the Rotary Club of Milton-Ulladulla to see if Rotarians and provisions could be quickly organized to provide breakfasts and dinners for 50 to 100 firefighters over the coming few days.

Rotarians rose to the occasion: food was organized, barbecues were found and borrowed, the call went out by email for at least seven Rotarians to be support staff for mornings and nights and weary firefighters were offered breakfast and dinner.

The first day, Saturday, went as planned with firefighters working in the bush south and west of Ulladulla. However, the temperatures were rising and the conditions were deteriorating by the hour. On Sunday, the fight was on to protect the nearby communities of Bawley Point and Kioloa.

By Monday, the conditions were even more drastic. The fires had broken containment lines, and in a number of places crossed the Princes Highway that runs roughly north and south, threatening more homes. We fed 200 firefighters that morning. In the afternoon, the firefighters were forced to move the staging post to Burrill Lake on the very outskirts of Ulladulla. Rotarians bravely soldiered on to provide hot dinners to the firefighters.

The time had come to renegotiate our role with the local branch of the State Emergency Service (SES) Australia’s volunteer-based emergency and rescue service. As a result, Rotarians, their families, and now other community members committed to supporting the SES throughout the month of December. As the highway closed, meals were served in various locations until the staging area moved further north beyond our reach.

On New Year’s Eve, the fires had gained an upper hand, destroying a number of houses. An evacuation center was established at the Ulladulla Civic Centre and Rotarians served meals, provided bedding, and gave hugs to evacuees bunked down there.

Once the fires were under control, donations poured in from all over the coast of New South Wales, enough to fill two basketball stadiums. Rotarians were notified by email to unload trucks by hand and with forklifts, and help sort and distribute the goods to those affected by the fires.

Restaurants, coffee shops, and hotels have taken a hit in the coastal area as tourists were asked to stay away during January. Our club has decided to change our meeting venue once a month to support different restaurants.

Rotarians will continue to rally and support those affected. We will now be involved with disaster recovery, putting Service Above Self. The South Coast is safe, open for business, and looking forward to hosting our district conference in March.