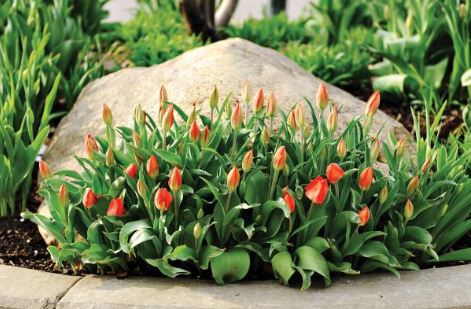 With 10,000 tulips that blossom each spring and neatly trimmed trees and shrubs lining the streets, tiny Slippery Rock, Pennsylvania, is clearly a well-cared-for community. Planter pots are dotted throughout the borough’s 2 square miles, filled with a palette of greenery that rotates with the seasons.

The project, known as Slippery Rock in Bloom, was launched eight years ago by the Rotary Club of Slippery Rock’s president at the time, Jeff Berta. For this community improvement effort, the club raises funds and club members get their hands dirty.

Last year, their work was rewarded when a nonprofit called America in Bloom gave Slippery Rock top honors in the category of communities with a population of 3,000 to 10,000. The contest promotes improvements in quality of life, and entries are evaluated on seven criteria: overall impression, community vitality, environmental efforts, heritage celebration, urban forestry, landscaped areas, and flowers.

Though the plantings are the most obvious aspects of the project, “it’s a lot more than the flowers and tidiness,” explains club member Regina Greenwald, who coordinates the Slippery Rock in Bloom committee. The committee (made up of Rotarians and other residents) plans and coordinates year-round beautification, fundraising, and the thousands of volunteers who participate in the program. “It takes a lot of in-depth planning on environmental and sustainability issues,” Greenwald says.

“We started by cleaning the town: We created a recycling program, and there was a fall cleanup with schools, Slippery Rock University students, and community volunteers,” she says. Since then, the committee has raised nearly $100,000 from individuals and from private and public grants to pay for numerous projects.

The committee has torn down an old bank building that was an eyesore, and, along the town’s streets, replaced flowering pear trees, which had been wiped out by fire blight, with trees less vulnerable to disease. It has worked to improve local water quality and encouraged landlords and homeowners to clean up yards and spruce up houses. It coordinated with the local parks board to put walking trails in a park, where members will soon add benches and exercise areas.

And everyone helps out, including scout troops, church groups, local businesses, college students, and Rotarians. “Thousands of people have participated,” says Greenwald. “You’ll never walk through another town and not think about pulling weeds after you’ve seen Slippery Rock.”

• Read more stories from The Rotarian