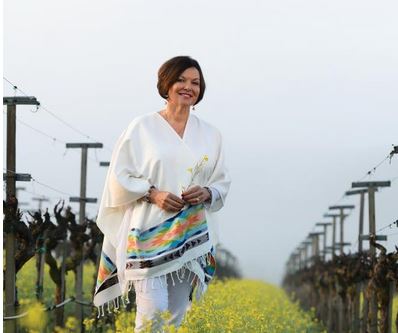 Heidi Kühn arrived in Utsunomiya, Japan, in 1975, a few months after the end of the Vietnam War. She was a Rotary Youth Exchange student, and what she saw and experienced in Japan led her to reflect on the post-World War II reconciliation between that country and her native United States. “The idea of former enemies bridging borders for peace left an impression in my heart,” she says.

More than 20 years later, Kühn had become a successful television journalist. She was asked by the Commonwealth Club of California, a well-known public affairs forum, to host an event featuring Jerry White, a land mine survivor who had escorted Princess Diana on her last humanitarian mission in 1997. It was a short time after the death of Diana, whose efforts to ban land mines had inspired Kühn. “That night, I made a prophetic toast,” she recalls. “‘May the world go from mines to vines.’”

Kühn decided to act on those words and founded a nonprofit called Roots of Peace that has worked to remove hundreds of thousands of land mines and other unexploded ordnance from farmland and replace them with productive fields, such as orchards and vineyards.

In Afghanistan, the organization has helped restore fields in the Shomali Plain north of Kabul, which had been a thriving agricultural region until the Taliban burned vineyards, cut down fruit trees, and laid land mines. Since 2003, Roots of Peace has connected growers with supermarket chains in India.

Roots of Peace is also partnering with the Rotary clubs of San Francisco and Bangkok Klongtoey, Thailand, which received a $197,000 global grant from The Rotary Foundation to remove land mines and plant black pepper vines and taro in Vietnam’s Quang Tri province, and help farmers market the high-value crop.

Kühn and her husband and Roots of Peace partner, Gary Kühn, visited Afghanistan in 2018 to see the fruits of their labor. They flew out of Afghanistan on a cargo plane carrying the harvest.

“To me, that was the greatest inspiration, the greatest moment in my life, to know that we can turn dreams into reality,” Kühn says. “Not just for ourselves, but for countless farmers and families around the world.”