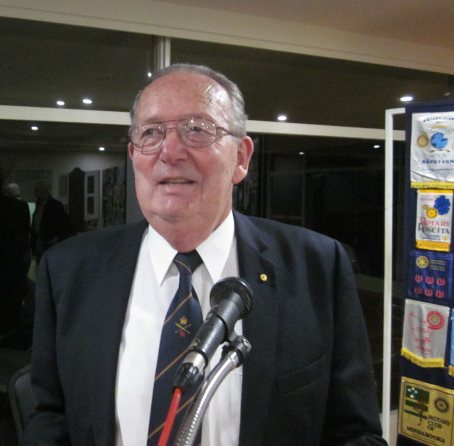 Our last meeting’s guest speaker was at the combined meeting with the Kings Meadows Club on April 18th. The speaker was well-known local identity, Dr Frank Madill.
Frank’s subject was the Order of Australia honours system. Frank was awarded a membership pf the Order of Australia in 2014.
Frank said the honours recognize outstanding members of our community—those who have worked for a better society and making our community a better place in which to live. Any person has the opportunity to nominate someone they think might be worthy of receiving such an honour.
The honours system has religious and political elements in its history, where orders of chivalry were bestowed on citizens by monarchs. The current system of Australian honours replaced the imperial system of CBEs, OBEs and MBEs nominally bestowed by the Queen.
The current orders system was instituted by the Queen in 1975 on the recommendation of Gough Whitlam and was modelled on the Canadian system of honours. A committee of nineteen citizens prepares a list of nominees twice a year to be presented to the Governor-General for approval. The Governor-General acts on behalf of the Queen, who is the Sovereign Head of the Order.
Malcom Fraser added knights and dames to the order in 1976, but this was abolished by Bob Hawke in 1983. Malcolm Fraser also added the Medal (OAM) to the order list. It has no annual quota. The order of knights and dames was reintroduced by Tony Abbott in 2014 but this was abolished by Mal-com Turnbull a year later. There are currently no plans to reintroduce knights and dames into the order system.
The highest award under the system is Companion (AC) limited to 35 per year. The next highest is Officer (AO), limited to 140 per year followed by Member (AM), limited to 365 per year.
Frank suggested that service to the community by Rotarians is worthy of recognition and encouraged those present to nominate someone they consider to be worthy of receiving an award.
At one stage Frank said the awards were considered to be an ‘old boys club’, with recipients predominately male. This has changed now, with the male-female balance approximately equal.
Awards are made twice yearly on Australia Day and the Queen’s Birthday. About 3,000 nominations are received each year. Nominations can take about two years to process, as background checks need to be undertaken. Frank said about 50%-60% of nominations are successful. Nominations can be made on-line and require four supporting referees.