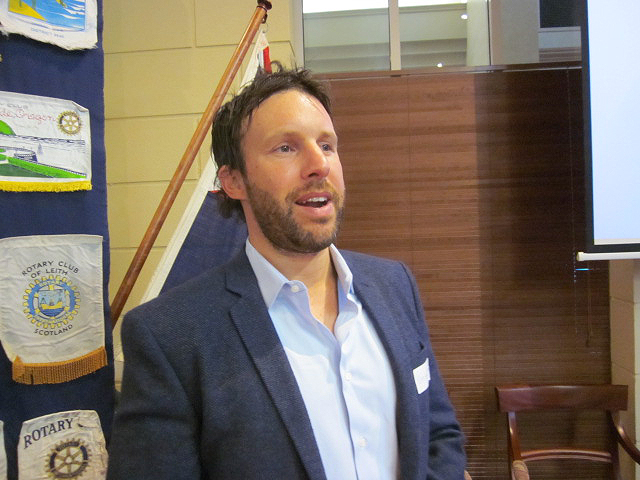 Tom Harrison from the Harrison Humpreys Real Estate firm in Launceston was our guest speaker last week . Tom and his friend Ben Humpreys bought the business from their respective fathers a few years ago. Tom’s father Rob has been a Rotarian, so Tom said he was quite comfortable at a Rotary club. He said that Rotary’s emphasis on service aligned with his firm’s philosophy.
Although his family was based in Longford, Tom became a boarder at Launceston Church Grammar School at quite a young age. He went on to complete a Bachelor
of Commerce degree from Deakin University in Victoria and subsequently worked in the staff recruitment industry in Melbourne and London. Tom said this industry was a tough environment involving frequent 7am starts and evenings taken up with entertaining clients.
Tom eventually moved back to Launceston to begin a career in the real estate sector. This change also brought an interest in the Old Launcestonians football club.
His firm is involved selling and renting residential, commercial and rural properties. Tom has a growing interest in the Launceston property market which fell by 12% in 2011-12. It remained static up to 2017 but since then it has grown by 10% – the highest increase for a decade. Launceston had no population growth in 2017, but recently it has shown a small increase. The has prompted renewed investor interest anticipating a further rise.
Investors have been responding to the popularity of properties for short-stay tourist accommodation such as Air B&B. Demand for residential property is coming from people moving to the area, such as tree-changers, migrants and retirees. New major projects now being planned or executed have also sparked interest in the property market. The demand for Air B&B properties has had an impact on the long-term tenancy market. Pur-chasers of properties for short-stay tourism tend to pay higher prices than owner-occupiers or long-term tenancy investors. Not all short-stay businesses have proved to be successful. Tom said that the sector is in transi-tion, with some short-stay properties now reverting to long-term tenancy.
Hobart and Launceston are regarded as investment hot-spots, with Launceston having the edge. As mentioned, infrastructure projects are fueling demand, particularly from interstate. The market however is some-what fragile. Will tourism continue to increase and will tourists return? The challenge is there for clever marking to sustain growth.
Lifestyle considerations and a vibrant arts scene are big plus factor for Tasmania. Tom said that experience has shown that rents don’t generally follow prices. The Hobart market is showing significant capital growth, but Launceston provides a better net return. Chinese investors are interested, but are constrained by government restrictions on ownership. One area of growth for residential tenancies which currently attracting attention is unused spaces above shops in the Launceston CBD.