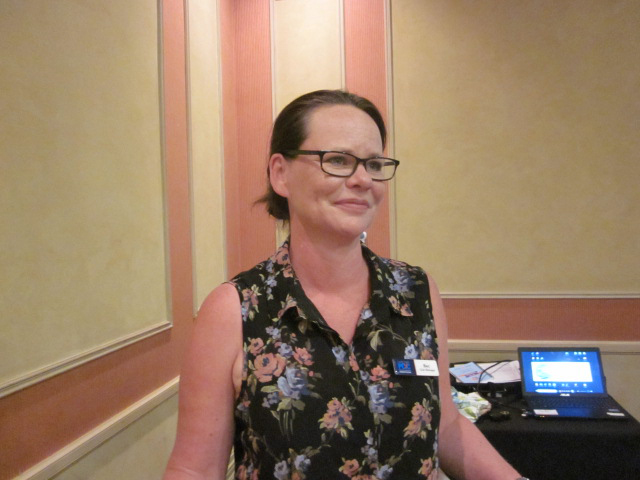 Bec is the Community Development Officer for the PCYC, which is now a separate organisation from the police, although they still have a significant input into its operations. Its programs still have focus on youth at risk. However, it runs a number of fee-paying activi-ties open to the general public, which help to fund its other operations.
The PCYC started as the Police Boys Club focusing on boys who had lost fathers in WW2.
It is the oldest and largest PCYC centre in Tasmania.
Today it partners with the police, the youth justice system, the education department, the government and community groups. It aims to reduce young people’s involvement with the youth justice system by developing them through activities like gym fitness, trampolining, tumbling, art, theatre, Taiko Drumming, Krav Maga (self-defence), Karate, boxing and Aikido.
The PCYC now runs a school holiday program, which includes archery tag, art, dance, theatre, orienteering, rock climbing, and archery for all ages, including young adults. It encourages participation of young offenders and young people disengaged from education. It has a Mobile Activity Centre which concentrates on the disadvantaged north-eastern suburbs of Launceston and also the Ashley Detention Centre. It also helps with community events, neighbourhood house programs and schools. It touches 750 people in 12 locations each month.
Specific programs are Ascent for women and Result for men. They are empowerment and resilience programs for high schoolers and behavior at-risk youth. Activities include abseiling, AMC survival skills, rock climbing, yo-ga, mindfulness and boxing.
The PCYC partners with Reclink, City Mission, Anglicare, Life Without Borders, and the Migrant Resource Centre.
Another program run by the PCYC is ‘Connect’ – a Friday afternoon youth club for 12—18 year-olds consisting of two hours of active recreation. There is also a chess club, also chess-boxing and Taiichi. These are targetted at young people on the autism spectrum and also the aboriginal community.
The PCYC plans to run an alternative education program in Term 2 this year aimed at 10-13 year-olds who have either never been to school or have not been in school for a long time. It will be one hour of activity and two hours of education.
Funding for the PCYC’s programs comes from the Merridew and W.D. Booth Foundations, the Department of Education, community donations, business sponsorship and time-donations by volunteers. The PCYC is now an independent registered charity.